Later that night he will be giving a Cap Global Roots performance at Presentation House Theatre. More info & tickets here. 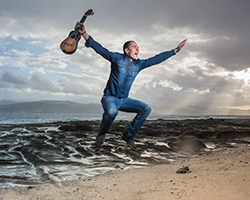 “Virtuoso timple player Germán López hails all the way from the Canary Islands off the Southern Coast of Spain and is bringing his unique and modern take on timple music to venues all over the world. Imagine the lovechild of a ukulele and a guitar and you have the small but resonant 5-string timple. Similar to the South American cavaquinho, cuatro and charango, the instrument’s precise and singing voice floats effortlessly in and out of complex patterns when under the fingers of López. Though a traditional Canarian folk instrument, the timple has been revived by players such as López in the last 15 years. Recently he has been collaborating in jazz-fusion projects, with symphony orchestras and on his recent album, De Raiz, he experiments with flamenco and global influences, weaving multiple elements in order to create something fresh and nostalgic all at once. Featuring Germán López on timple and Antonio Toledo on guitar.”